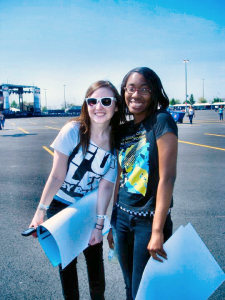 Photo: Whitney and I covering the Festival in VersaEmerge and Travie McCoy snipes.

Story: Where do I start with this story… the beginning, I guess. My magical friend Whitney and I were interviewing an up-and-coming band a few years back… and to this day it is probably still my most favorite interview that I have ever done. We split before the headliner started because we were hungry and since I can sometimes be directionally challenged, we wound up in such a weird location at a stop light that was nowhere near where we were supposed to go. Somehow the band we interviewed was crossing with their van and they all pointed at us and honked. We honked back. The next time the band was in town we were sitting at the bar socializing and members of the band came up and sat next to us. The bartender tried introducing us to each other, because apparently he knew them too, and we all just kind of laughed. They started talking about the interview we did with them last time. Shortly after that evening we flew to NYC to work at a Festival. While we were putting up snipes before the gates opened, we saw the band walking around putting up their snipes and signs advertising their performance time. My friend Whitney is so funny, and wound up calling one of them out by their nickname. They all turned around and laughed really hard since she remembered it. Since then, that band has changed big time (not necessarily in a way that I would personally consider positive). There are different members, one of them was on a national tv show, and they are just different. But, whenever I hear this song… it makes me think about the original lineup, and the silly stories, because they really loved Third Eye Blind.