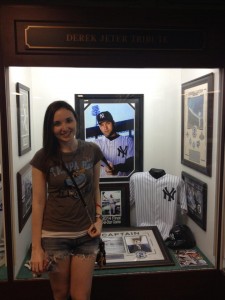 Story: Last night I went to see the Angels vs the Rays at Tropicana Field. I also learned that the Ted Williams Museum was recently relocated so I wanted to take a look. BEAUTIFUL! There’s even a theatre in there now which is really neat. Aside from me recommending for you to check that out if you’re ever at a game… I wanted to just take a second to say that Derek Jeter is one of the players that I remember from my childhood. There aren’t many players that you can recall such amazing highlights from random games throughout your lifetime, but Jeter is one of those guys–for me at least. I have a lot of respect for how he has played. There was an awesome display set up honoring his career with images, patches from the World Series he’s played in and memorabilia. Crazy to think this is the last season he will be playing.

I guess this is growing up haha