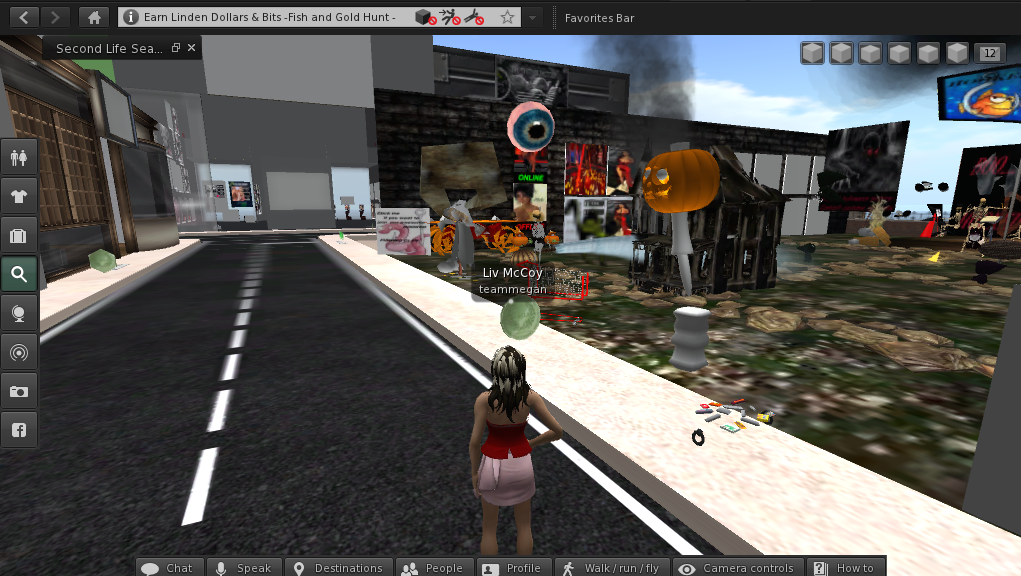 There is a complete parallel universe out there. Where? The things is, you can’t exactly see it because it’s virtual. It exists somewhere out there in internet coding.

This week in class we have been exploring digital ethnography. As explained in our lecture (for those of you who aren’t in class with me but read my blogs), ethnography is a qualitative research method in which the researcher describes and interprets the shared and learned patterns of values, behaviors, beliefs and language of a culture-sharing group (Harris, 1968).

So, digital ethnography involves taking all of the research to the web and having human-technology interactions.

Before this week I had never heard of Second Life. For this assignment, we needed to jump in and spend some time on SL to learn how to fly, walk, and function in the virtual world. During our readings there were brief explanations for what certain things meant, so I thought I would be prepared well enough to have a basic understanding once I logged on. Boy, was I wrong! My initial log in featured my avatar standing on a beach as I tried to figure out the controls. Suddenly someone else appeared next to me and I could tell that they were trying to learn like I was because their avatar moved in circles.

I had the walking around part just fine but I’ll be honest, I was more concerned with the less-than-cute outfit my avatar was wearing. My goal became to transform my avatar to look more like myself but I quickly learned that things in this digital world cost money just as they do in the real world. The currency which is used throughout SL is called a Linden and with a free account, you start dirt poor with $0 in your bank.

I first clicked all of the buttons and menus to see what was available. I named my virtual person “Liv McCoy.” There was no significance to “Liv” but I used “McCoy” after my favorite rock’n’roller, Josie McCoy from Josie and the Pussycats. I was determined to transform Liv into a virtual rockstar. Thinking back about this now, I really wish I would have given her the first name of Kimberly in honor of the original Pink Power Ranger. However, Second Life only allows you to change the name of your avatar once every seven days.

Teleporting was fun. It made me feel like my avatar was almost in a Harry Potter movie getting to apparate. Of course, by teleport I really mean that once you find the location you would like to go to, you hit the “teleport” link and before you know it, that scene is loading around your avatar.

I found a place called Gold Hunt that said I could have all of the money I was able to find. GREAT! My quest of changing my avatar was within reach! I walked around the streets grabbing the coins one at a time and their value was all revealed to be .05 cents. With each coin I picked up, I had to wait thirty seconds too. Money isn’t really free, now is it?! My second interaction with another avatar came when a girl ran up and stole one of my coins! Shame on her for stealing .05 from me. Probably not an area of SL I should be hanging out in alone! Thanks, friends! After walking around for about thirty minutes, I wound up with about .40 cents in my bank account. My avatar was going to remain unfashionable without my likenesses.

I found a few different places that offered free items, thanks to my trusty pal Google. The only things I was able to grab were resemblant of sheets that attached to the avatar’s arms. Still, not a great look. Then behold! I spotted a store across the way that looked like they had platform heels and cute little party dresses. But, with the shoes being over $30, my SL avatar was going to remain that little moth striving to be a butterfly.

Second Life seems interesting if you have a decent amount of time to invest into your digital self. It will take time to earn Lindens, make friends, build your house (you can own land if you have a paid account), learn the initial controls to fly/walk/change camera angles and more. For those of you who play SIMS, it reminded me a little bit of that… minus the “rosebud” cheat code for Simoleons.

6 thoughts on “When real life gets boring…”