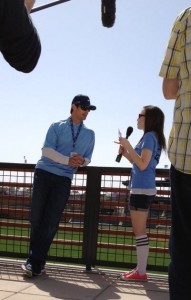 In 2006, my life changed. I lay in a hospital bed wondering if I fulfilled all of my goals and dreams. If that was it, was I satisfied? I was twenty-one years old and matured quickly as an adult in those moments.

My life would never be the same. I was diagnosed with a rare heart condition called Wolff-Parkinson-White Syndrome which is heavily responsible for a large majority of sudden cardiac death cases in young people. Somehow I was spared from that fate. I get to lead an amazing life. While I have not let that one traumatic event in my life define me, I have allowed it to inspire me to help others and to go after all of the things that I want in my life. It is better to try and fail than to never try at all. In that regard, do you ever really fail when you put your best effort into something? I don’t believe so.

My educational and performance background has continued to provide me with so many opportunities in my life and my goal is to make the most out of every single one of them. One of my most recent accomplishments was opening my own business called Queen Bee Social LLC. Through this venture I am excited to help businesses form stronger relationships with their consumers on social media. This is putting to use my master’s degree in Mass Communication with a specialization in Social Media from the University of Florida (Go Gators!). My love for social media began with websites like LiveJournal and Myspace and only increased when Major League Baseball recognized me as a top 30 finalist out of over 22,000 applicants in their social experiment called the MLB Fan Cave in 2012. From there I went on to helping my then employer increase their social media presence by over 300,000%.

When I was about twelve years old I established a website called Stardust where my friends and I would interview our favorite musicians and share it with the internet. I never imagined that more than half my life later, I would still have the same passion for sharing my love of music. I am a self taught photographer and even had the opportunity to shoot my favorite band My Chemical Romance during their World Contamination Tour. Having the background with photography and editing has added more dynamic to my social media toolbox with the content that I am able to create.

Additionally, I have experience with acting, modeling, music and everything “fun”. It has led me to be involved with all types of filming projects, print ads, podcasts and more.

Things I’ve Done:
* Opened for Jessica Harp (one half of the Wreckers) and the boy band O-Town in my teenage years
* Made it to the Final 30 for the MLB Fan Cave out of over 22,000 applicants in 2012.

OTHER
Professional Wrestling Personality – Trained at NWA: Florida and FXE