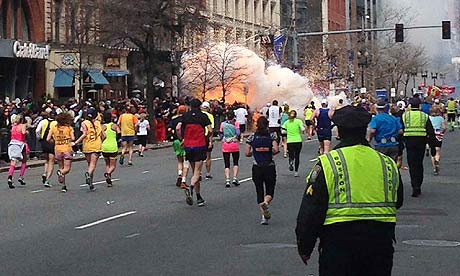 Our very own need to consume details about events at a fast pace also presents us with ethical concerns. Social media is used for many good things, but it is also so new and in being such, we are all still learning what is acceptable and what we should deem unethical.

One of the events that helps draw this to the forefront is the Boston Bombings.

Whether we were in disbelief and needed proof that this really was occurring, or if we knew someone running and were worried about them, or if we were just at work and did not have access to a television, we relied on social media and the news organizations and even event attendees who were posting to networks like Twitter to give us information.

How would you feel if someone posted an image of your loved one covered in blood and in shock, laying on a Boston sidewalk? It would be a horrifying sight and not something that you would want anyone else to see.

I’m going to refrain from posting the image to my blog that we had to view and report on for class, because it is something that I wish I did not have to see. I am a squeamish person and the image was beyond grotesque. I will tell you that it was an image of a man who had his leg blown off and he was sitting in a wheel chair presumably being pushed somewhere to be attended to. With having his leg blown off, the photo showed things that nightmares are made of–things that movies try to emulate to make situations look real. But, this is real.

That is something that will never leave my mind.

How can that type of image be ethical for anyone to view? At what point does posting graphic photographs in real time really cross the line?

The social media world is comprised of people of all walks of life and this includes minors. Should they be exposed to something like that in their news feed?! If you had a child, would you want them to see that?

Perhaps if the world still expects to have all types of real time content posted without any types of ethical edits that a TV would have using a blur, a good idea would be to use a rating system when a user uploads an image much like modeling websites do. In the modeling world you have terms that generalize the photo as safe for everyone or if the modeling photographs are a bit risqué, there’s the option of selecting something like, “Not safe for work.” This would provide users the opportunity to select, “Safe for everyone,” or “May contain sensitive content,” when they are uploading photographs to social media. In the event that the image contains sensitive material, users would have the warning prior to having to see it without a warning.

Not only should we consider other people viewing the image, but what about the MAN in the image? Do you think that he would want such a devastating time of his life to be exploited online? We must assume that it could be the single worst thing that has ever happened to him, and here some people are just wanting to view the image to see the graphic nature of what that type of injury would look like. That man had no say in his image being taken or shared.

The event coordinator in me is also a little confused because when we want to use images of people at our events we need to have them sign a release or we have to post signs stating in the area which you are in is being filmed or photographed and by being in that area you are agreeing that your image and likeness can be used. If you are presumably reporting the news, does the need for a release seemingly disappear and anyone is able to be photographed?

In my frame of mind, I would be disgusted if someone shared an image of me like that. Where are people’s rights? There are so many ethical concerns that we can consider. The way we get news is changing and we need to establish some sort of boundaries.

Do you believe it is ethical to have these types of images distributed on social media? If you have shared disheartening photos such as this, what was your motivation?