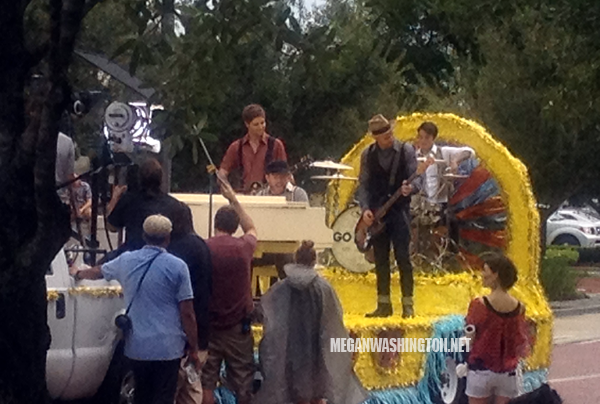 Story: I answered a casting call for a music video, and it turned out to be for Go Radio. Vocalist Jason Lancaster was also previously part of Mayday Parade when the band started years before so I was really excited to get to be part of the Go Radio project. We actually filmed this in the middle of a hurricane which makes for a really interesting story… my dress kept trying to fly up all over the place! Thankfully, I THINK I was a lot quicker than the wind. Anyway, I know I’m probably just a tiny dot in some of the scenes, or the corner of my elbow may be showing, but it was still really cool to get to see how a video was shot behind the scenes. If you wanted to try to spot me (and if you do–let me know because it’s like WHERE’S WALDO and I can’t even find myself), my scenes involved the band coming down the street on the float. I was a “shopper” passing by wondering what in the world was going on in the middle of the street.