I’ve seen so many people try to customize shoes, so I decided to make a pair dedicated to my favorite baseball team–the Tampa Bay Rays. Now there are a few different ways that you are able to create sparkly heels, but this tutorial will explain the way that I found best worked for me.

If you are not the crafty type, I would recommend starting with a cheap pair of shoes so you don’t potentially ruin a pair that you really like or that were expensive. After you’ve successfully completed your first pair, the sky is the limit!

Things you will need for this: a pair of shoes, Mod Podge (Glossy Finish), paint, fine glitter, fine paint brush for design accuracy, a “standard” sized paint brush, tracing paper if you plan to do any designs

Total cost: $35 (This is significantly less if you already have most of the supplies)

Total time: It took me roughly 9 hours–reason being that you have to wait for the layers to dry. I split this time over the course of two days. 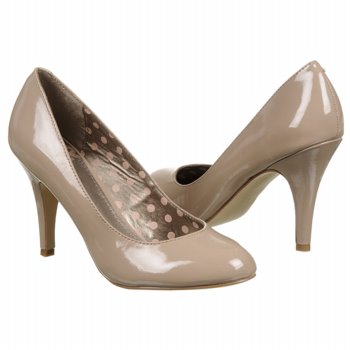 Step One
I didn’t have a pair of closed toed heels that I wanted to decorate so I hunted for a cheap pair and found the pictured shoes at Famous Footwear for $15. The brand is Fergalicious and the shoe name is, “Utopia.” Color wasn’t important to me because I planned to put the shoes through a process. Though, I would suggest if you plan to do a lighter glitter and do not feel like painting, try using a lighter colored shoe. The same would be relevant for doing a darker shoe.

**One thing you will want to make sure is that the surface of the shoe is texture free–no patterns!** 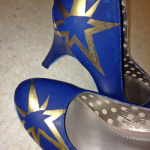 Step Two
I began this project by painting the surface of my shoes navy blue. For this specific color, it took about two coats of paint before I was satisfied with the taupe color being covered up. You can continue to paint the shoes as much as you would like, but keep in mind that it does not have to be perfect because the glitter will cover it.

Once the paint was dry, I flipped the shoes over and painted the soles a baby blue color. For safety purposes, I left a small portion of the center of the sole paint free so that it would still grip the ground. Plus–nobody is going to see this area, anyway. The lighter blue paint took roughly two coats before I was happy with the result. I wanted to do two separate colors so that there was a contrast between the shoe and the sole area adjacent from the heel. You can do yours in one color, or as many colors as you would like. 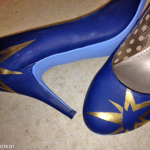 Step Three
If you wanted to do a design on your shoes, I would recommend you plan out your drawing on tracing paper so that you can transfer the drawing accuratly multiple times. I made my initial drawing and then flipped it over and traced it on the opposite side of the paper. You don’t have to do this if you have a sheet of carbon paper, but carbon paper can tend to be expensive… this is a simple and cheap cheat.

For my shoes, I chose to use the Rays’ burst on the toe of one of the shoes, and the back heel on the other shoe. Obviously, only begin to incorporate your design into the shoes after the paint has dried. Then, paint your design accordingly. 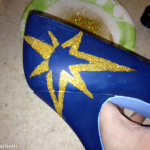 Step Four
This is where the whole project gets really messy. I personally think it is easiest to start with the smallest details and work outward, so naturally I began with the golden burst itself. I had read another tutorial online that said to mix the glitter with the Mod Podge first and do one layer after another as it dries. After I did one layer, I quickly realized that would probably take days and that it was a poor recommendation. What I did was take the Mod Podge and paint it on to the burst as if it was paint or glue. Then, I poured the fine gold glitter over the burst and let it dry. There were only a few very small spots in the bursts that I had to go over with an additional layer to make sure it all looked uniform. After the smaller spots finished drying, I took the Mod Podge and painted a layer over the burst so that I wouldn’t ruin it or chip all of the glitter off while I worked on the blue colors. 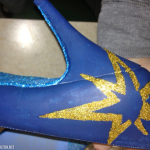 Step Five
I started with the lighter blue glitter first, and did the glittering process the same way that I did with the gold. The bottom of the shoe is pretty easy to get covered–just prop it against something so that the sole is facing up. This too will take roughly two coats. After the glitter is dry, put a coat of the Mod Podge over it to help it stay intact while you work on the rest. Next, I moved on to the darker blue glitter once I was sure the entire sole was dry. You’ll want to do this in sections because it becomes increasingly harder, as you work your way around the shoe, to hang on to the shoe without running in to the wet areas. The darker blue glitter seemed like it took about three or four coats before I was happy with how the shoe looked. Remember, it’s important to make sure the surface of the shoe looks perfect since this is what people will be looking at; be a perfectionist. 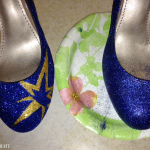 Step Six
You will want to make sure that when you are finished with your shoe, you cover it a few times–both the surface and the sole–with the Mod Podge. This will help to seal everything in place. The reason you want to use the glossy finish is so that your glitter doesn’t loose all of its sparkle… which tends to happen very slightly (I thought so anyway) when you use the Mod Podge anyway… but there’s no way around using it. It’s okay if your glitter looks really gritty after you apply the Mod Podge because that goes away as it dries. 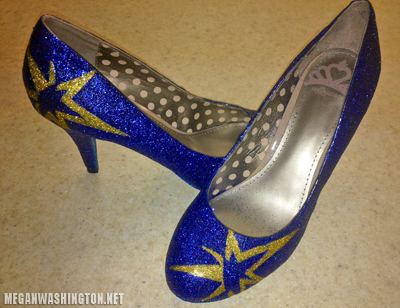 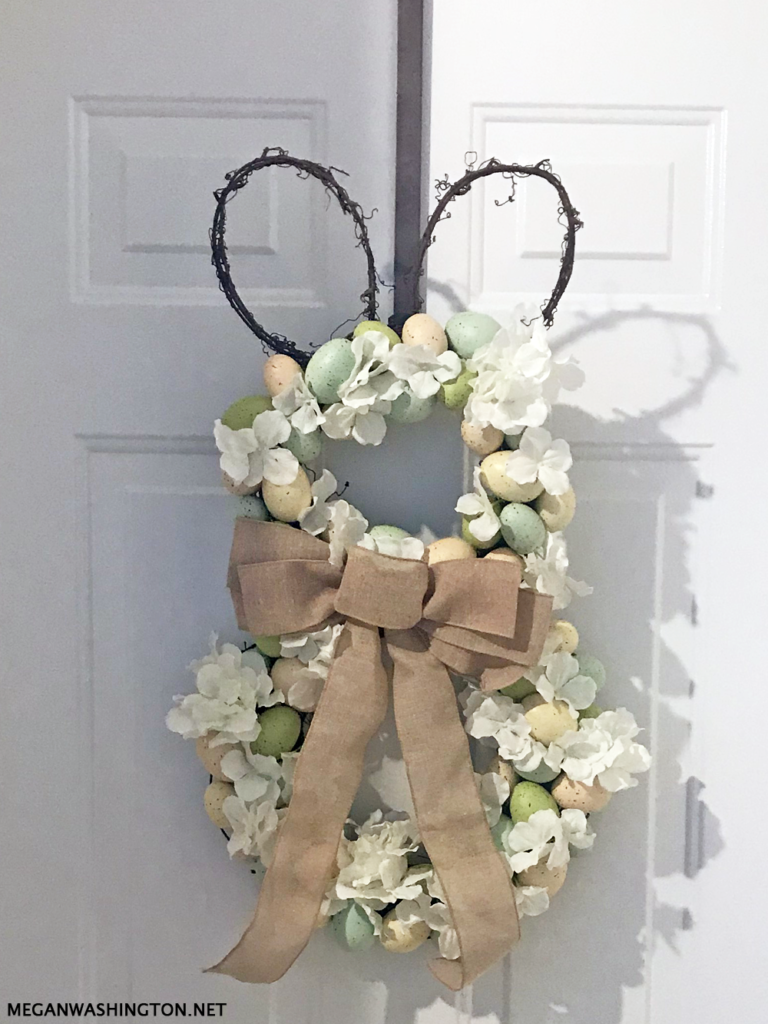