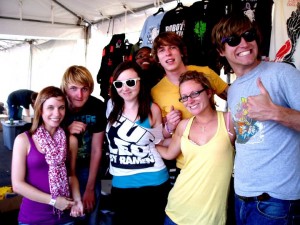 Story: I don’t really like this song… but when I hear it, I think of really fun times. Back during the FBR Tampa days, we all had this thing where we spoke in a British accent (we tried to, anyway). Somehow it was decided that we all belonged to a fictional band called What Is A Delaney. We had all of the details figured out for what everyone “played”… and we had a Myspace… because why not?! We even posted on the Myspace that we were performing on the Tijuana Flats stage at a music festival that we were going to be working at. There wasn’t really a Tijuana Flats stage, we just enjoyed eating there so much that it became another joke. So, that was our fictional band in our fictional world. It was fun. Also, in this video… Metro Station really was playing “Shake It” in the background during the ‘autograph signing.’

On a side note, I would absolutely LOVE to make a “real” rockumentary. By REAL, I mean fictional… and I have characters in my head for it already.