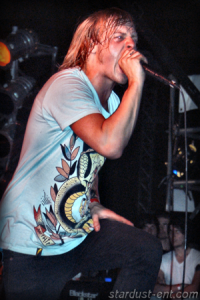 I took this image during the band’s performance.

Story: This band just intrigues me from their subject matter to their breakdowns. They were closing one of the stages at Bamboozle a few years back at the same time that Paramore was performing and they thanked the crowd for wanting to check out their music despite the reviews their album was receiving in the US. I had seen them once before a few months prior and had told my friends how crazy of a show they put on… so they said they wanted to check them out as well.